Cupcakes may take center stage when The Cake Bake Shop opens in Broad Ripple, but the sweet treats have already had a starring role in a feature film! Broad Ripple resident and baker Gwendolyn Rogers has been flying to Atlanta to make cupcakes for scenes in the movie sequel “Dumb and Dumber To,” coming to theaters this fall.

The movie opens with Jim Carrey’s character — Lloyd Christmas — grabbing some cupcakes off a platter, taking a few bites, then flinging them across the room. “It was a lot of fun,” says Rogers, who flew back just last October to make more cupcakes for the movie’s final scene that features Carrey, Jeff Daniels and Kathleen Turner. Filmmakers Peter and Bobby Farrelly had Rogers’ cupcakes on the brain when they wrote the scene. Her husband — Park Tudor graduate J.B. Rogers — is a producer and assistant director on the film. He has worked on most of the Farrelly brothers films, including the original “Dumb and Dumber.” So, when the filmmakers heard J.B.’s wife was opening her own bake shop, they came up with a cupcake scene for the movie! “It was easy enough just to make cupcakes,” laughs Gwendolyn Rogers. “The challenge was Jim Carrey is gluten free!” Rogers went through batches and batches of cupcakes trying to come up with just the right gluten-free cupcake. “I finally perfected a recipe that I thought I could serve to Jim Carrey!” Rogers says she also made cupcakes for the crew. “I would take at least eight dozen of all flavors when I would fly to Atlanta,” says Rogers. “They would be there waiting for me!” That wasn’t the only crew that has spent time waiting for Gwendolyn’s cupcakes. The Broad Ripple baker won a British bake-off where her chocolate cake caught the eye of Elton John’s entourage. They invited her (and her cakes) backstage to his concert in Paris. “I had never been backstage before,” says Rogers. “And all because of my cakes!” 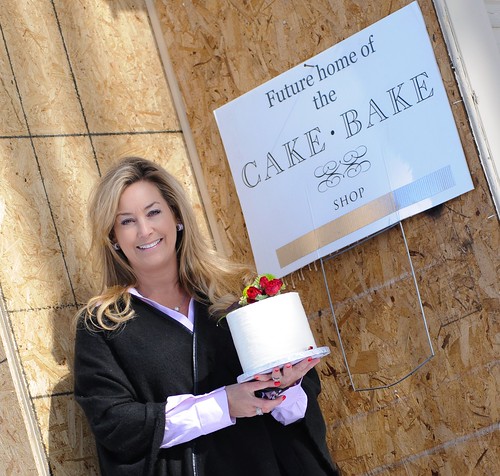 Rogers and her husband wanted to stay in Indiana so their boys — Drake, 11, Baxter, 16, and Weston, 13, could attend Park Tudor like their dad and J.B.’s family. In the meantime, the family is excited about the opening of the The Cake Bake Shop at 6515 Carrollton Ave. It will serve up fresh baked goods, inside and outside, with wine and champagne in a “glam-French” inspired setting. In the meantime, Rogers says her brush with Hollywood has taught her a lot. After all, once you’ve spent countless hours perfecting a gluten-free cupcake for Jim Carrey, opening your own bakery should be a piece of cake!
Share Share on Facebook Tweet Tweet on Twitter Pin it Pin on Pinterest
Back to Press